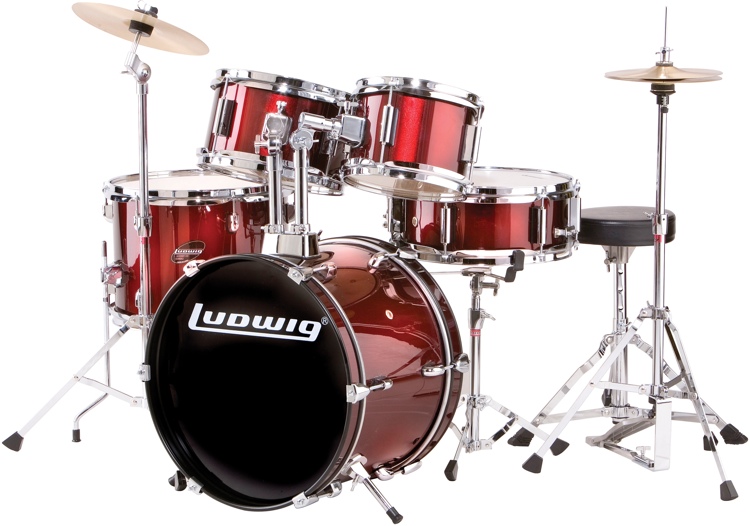 A drum kit — also called a drum set, trap set (a term using a contraction of the word, “contraption”), or simply drums — is a collection of drums and other percussion instruments, typically cymbals, which are set up on stands to be played by a single player, with drumsticks held in both hands, and the feet operating pedals that control the hi-hat cymbal and the beater for the bass drum. A drum kit consists of a mix of drums and cymbals, but can also include the woodblock and cowbell . In the 2000s, some kits also include electronic instruments. Also, both hybrid (mixing acoustic instruments and electronic drums) and entirely electronic kits are used.

A standard modern kit (for a right-handed player), as used in popular music and taught in music schools, contains:

The drum kit is usually played while seated on a stool known as a throne. While many instruments like the guitar or piano are capable of performing melodies and chords, most drum kits are unable to achieve this as they produce sounds of indeterminate pitch. The drum kit is a part of the standard rhythm section, used in many types of popular and traditional music styles, ranging from rock and pop to blues and jazz. Other standard instruments used in the rhythm section include the piano, electric guitar, electric bass, and keyboards.

Many drummers extend their kits from this basic configuration, adding more drums, more cymbals, and many other instruments including pitched percussion. In some styles of music, particular extensions are normal. For example, rock and heavy metal drummers make use of double bass drums, which can be achieved with either a second bass drum or a remote double foot pedal. Some progressive drummers may include orchestral percussion such as gongs and tubular bells in their rig. Some performers, such as some rockabilly drummers, play small kits that omit elements from the basic setup. Some drum kit players may have other roles in the band, such as providing backup vocals, or less commonly, lead vocals.